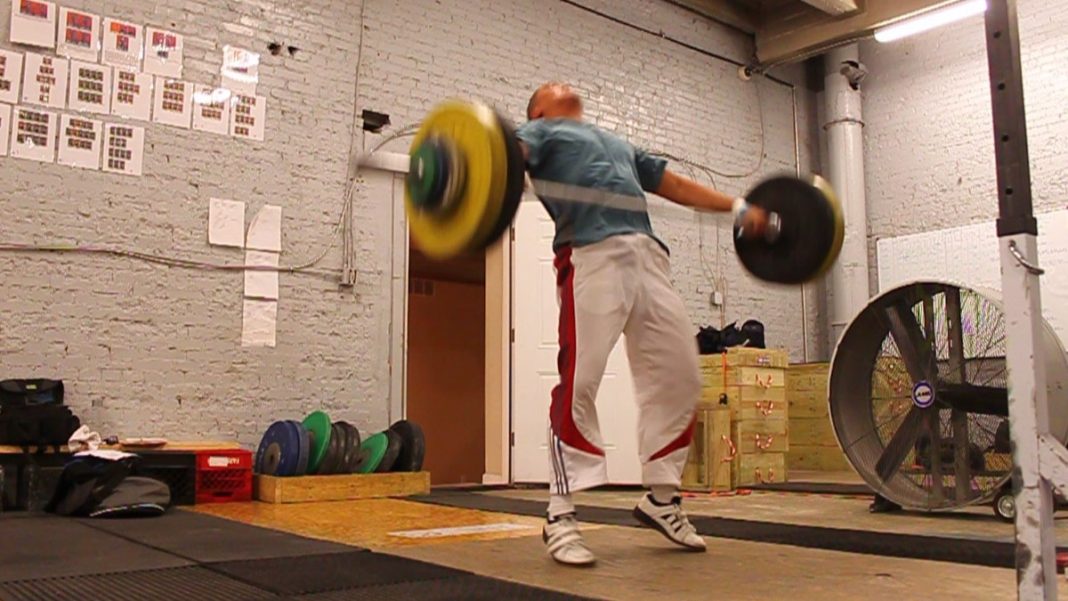 Over 20 years ago, my friends and I enjoyed going to the gym. The internet was fairly new, but there were resources that we’d use to develop our workouts. Nonetheless, I was still the upper body guy with a sprinkling of leg work. I was 5’11” and 165lb. At the end of college, I was closer to 175lb and a bit stronger. Upon entering the work force, I continued to workout in the corporate fitness environment. I mixed it up and tried various routines in Men’s Health. I never incorporated running; that’s just weird. But, I never got enough of moving heavy (to me) weights, including explosive calisthenics.

Our first kid comes along, and I’m looking for new challenges in the gym. I stumble into this video. I was just incredibly drawn to it, and I noticed that it’s an Olympic sport. After contemplating it a while (maybe days), I asked Riannon, as I’m changing our firstborn on the changing table, what she thought about me pursuing the 2012 Olympics. She was supportive of it, and that lit a fire in me. Little did I know what I was getting myself into.

It took some internet searching, but I was eventually led to this new spot, The Lab Gym. At the time, it may have been called something like, Human Health and Performance Labs. It was located near Forest Park, so that was a bit of a drive from Maryland Heights. It was the smallest gym I’d ever seen, but it was packed with everything, including five squat racks. Justin Thacker, the owner, was happy to learn that I was interested in olympic weightlifting. Personal training was pretty expensive, so I used resources such as books, trial and error, and video submissions to other coaches for critiques; Justin occasionally helped me, also.

I really wasn’t sure what to expect in terms of progress over time. As with many disciplines, working your way towards the top requires tremendous sacrifice. I did the best I could in local competitions, and when I was old enough to be in the Master’s division, I set out to become competitive in my age bracket and weight class. I trained at The Lab for ten years and qualified for my first international competition in Puerto Rico in 2016; we turned that trip into a family vacation. That was one of my most favorite family trips. In the fall of 2018, we were in the middle of moving, our schedule was becoming more demanding, and complacency set in. Training sessions became very sparse and eventually fizzled out. Before I knew it, four years had gone by. After having raised four kids, it was finally nice to sit back and watch them grow. Sitting back really means being busy, but at least we were done with diapers!

Just six weeks ago, we learned that our oldest had expressed interest in strength training. That was enough to wake up “that thing in the basement”. That is a Rocky Balboa reference. Now we enjoy workouts three days a week and I’ve got competing in my sights, again. That first week was the pits! There are many phases to family life, and I think we’re getting warmed up with this next one. The whole family is active, with activities ranging from dancing, kickboxing, Brazilian jiu jitsu, swimming, and weightlifting. Let’s go!!!

I had completely forgotten why I titled this post as such. Why wait for the new year to come around? If you want to pursue something, just go!

Check out our new Podcast – Not Enough Thumbs!

Improving Your Digital Photography: Part III – Out the Window